Classes will resume Saturday July 18th. Due to Covid-19 all classes will be held outside and social distancing is required.

We are a non-profit martial arts school dedicated to learning various historical fencing systems from extant treatises and manuals.

WHAT ARE HISTORICAL EUROPEAN MARTIAL ARTS?

…surviving dedicated technical treatises or combat manuals date to the Late Middle Ages and the Early Modern period. For this reason, the focus of HEMA is de facto on the period of the half-millennium of ca. 1300 to 1800, with a German and an Italian school flowering in the Late Middle Ages and the Renaissance (14th to 16th centuries), followed by Spanish, French, English and Scottish schools of fencing in the modern period (17th and 18th centuries). Arts of the 19th century such as classical fencing, and even early hybrid styles such as Bartitsu may also be included in the term HEMA in a wider sense, as may traditional or folkloristic styles attested in the 19th and early 20th centuries, including forms of folk wrestling and traditional stick fighting methods…” 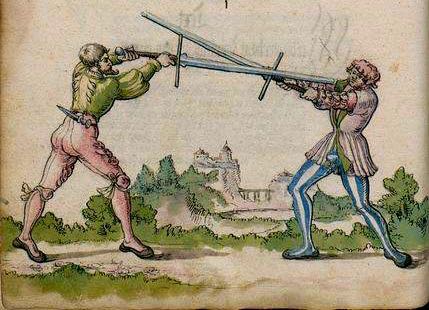 WHY SHOULD I COME?

No two people study historical fencing for exactly the same reason.  For some, it is a chance to experience history.  For others, it is an opportunity learn about and use weapons rarely seen outside of movies and video games.  Some use it as an alternative to more traditional forms of exercise.  Others want to test their skills in competition.

All are welcome.
All people of all shapes, sizes, colors, and experience levels are welcome.  We ask only that you train earnestly and treat others with respect.

We approach our training from three directions:

We are the Montgomery County, Maryland branch of the…

We are a member of the…